No Escape
by A.F. Stewart

“There’s a strange beauty here, my sweets.” Pausing in his journey, his voice echoed into the desert. His companions, two crows, settled to rest on a dead tree and a dusty rock. “Look at it. Just a rusted truck, another carcass mired in this cracked, hard-packed dirt, but see how the moon reflects off its metal. So pretty.”

He smiled. “Where were they heading, I wonder? Hoping to make it to the last city? Or simply fleeing blindly, trying to outrun their fate?” He looked out at the horizon, seeing the faint outline of a domed city in the distance. “They were so close. I wonder if they made it on foot?”

He moved closer to the truck, placing a hand on it. “It doesn’t matter though, does it, my sweets?” He rubbed a finger over the metal and the truck crumbled to metallic dust under his touch. “They can run until the end of time and I will still find them.” He started walking again, back on his path to the outlying city. “I will find all of them.” 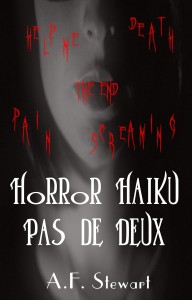 Come chase the dark words, fall into the spell of terror and sit with the poetic weaver as you watch the world burn. Horror Haiku Pas de Deux is a volume of poetry mixing horror with haiku and verse to chill your bones.
Poetic beauty lives forever with the undead.

Nina D’Arcangela is a quirky horror writer who likes to spin soul rending snippets of despair. She reads anything from splatter matter to dark matter. She's an UrbEx adventurer who suffers from unquenchable wanderlust. She loves to photograph abandoned places, bits of decay and old grave yards. Nina is a co-owner of Sirens Call Publications, a co-founder of the horror writer's group 'Pen of the Damned', founder and administrator of the Ladies of Horror Picture-prompt Monthly Writing Challenge, and if that isn't enough, put a check mark in the box next to owner and resident nut-job of Dark Angel Photography.
View all posts by Nina D'Arcangela →
This entry was posted in Authors, Dark Fiction, flash fiction, FREE, Horror, Ladies of Horror, Writing Project and tagged A.F. Stewart, author, fiction, flash fiction, Horror, Ladies of Horror, picture prompt, Writing Project. Bookmark the permalink.