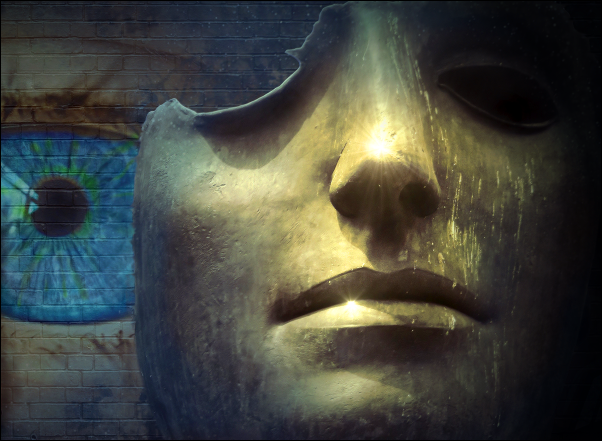 The Golden Mask
by Kim Richards

The golden mask hung on the temple wall for centuries. Its surface was dull from the ages and the loathing of any of the priests to touch it. Those who dared try to polish the mask suffered torturous dreams; waking in the morning with bruised faces and battered hands.

The wall was made of white brick and was stained with long dark streaks of something once liquid. Everyone supposed they knew what it was but no one said it aloud. It was a quiet, foreboding place. Many people, like Mari, wondered why anyone would want to come here, let alone worship a cruel goddess like this one. The stories of Kritha were tales of revenge and sacrifice. She could not recall any of them where men survived at the end.

Mari only came once a year when her mother dragged her along. Each time, she was told to wait in the mask room while her mother consulted with one of the priests. It was only an hour but the moments crawled by, dragged down from her boredom. She shivered from the frigid slate floors against her bare feet. She decided to walk around. At least moving might keep the cold from creeping up her legs. She learned long ago not to sit on the floor. That time she left the place with her teeth chattering and stiffened joints. It took her hours, tightly wrapped in thick blankets, to finally warm up.

She meandered out of the mask room, through a door at the back opposite the main entrance. It was the one the priest led her mother into when they visited. There, she found a long hallway running left and right. After pondering a moment, she decided to head down to the left.

The hall was dimly lit but Mari could see a light from one of the doorways ahead of her. As she came closer, she heard voices. Despite being muffled, she recognized one of them was her mother. Curiosity spurred her to creep closer.

“But she’s your daughter. How can you do that to her?”

The priest answered, “Do not pretend you were unaware that this is what she was brought into this world for.”

“I…I thought perhaps you would have another after all these years.”

The crack of a hand striking flesh echoed out into the hallway. Worried for her mother, Mari darted into the room.

Both her mother and the priest turned towards her. Her mother’s cheek  was red and darkening in the center. His mouth turned upward into a mean smile.

“Run Mari,” her mother cried out.

Mari obeyed the panic in her mother’s voice. She turned on her heel to flee back down the hallway.  She made it three feet before strong hands grabbed her shoulders, taking her to the  hard, cold floor. Darkness overtook her when her head struck stone.

Mari awoke to the sounds of chanting. She quickly discovered she couldn’t move any part of her body. She couldn’t feel anything either. She could see straight ahead. It was as though she stuck her head half way through a hole and got stuck.

She moved her eyes to look down and gasped. There on the floor lay her body in a large pool of blood. It was lying face up but without a face.

Her mother was held by two men and wept profusely.

Mari tried to speak but discovered she couldn’t. All she could do was look at those in the room with her.

“Ah, the goddess awakes,” the priest who was her father spoke in a happy tone.

He approached Mari’s face. She saw the golden mask in his hands, which were blistering before her eyes. He acted as if he had no idea or could not feel the pain. Then he lifted the mask and hung it on the wall, covering her face.

Nina D’Arcangela is a quirky horror writer who likes to spin soul rending snippets of despair. She reads anything from splatter matter to dark matter. She's an UrbEx adventurer who suffers from unquenchable wanderlust. She loves to photograph abandoned places, bits of decay and old grave yards. Nina is a co-owner of Sirens Call Publications, a co-founder of the horror writer's group 'Pen of the Damned', founder and administrator of the Ladies of Horror Picture-prompt Monthly Writing Challenge, and if that isn't enough, put a check mark in the box next to owner and resident nut-job of Dark Angel Photography.
View all posts by Nina D'Arcangela →
This entry was posted in Authors, Dark Fiction, flash fiction, FREE, Horror, Ladies of Horror, Writing Project and tagged author, fiction, flash fiction, Horror, Kim Richards, Ladies of Horror, picture prompt, Writing Project. Bookmark the permalink.