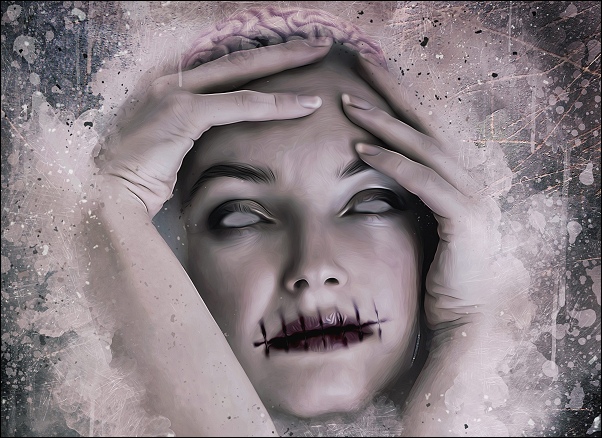 How tiresome it had become to watch them come and go with no regard for me or my kind. We stood all around and effortlessly represented what they could never be. The vast majority of us were expressionless, but if you cared to look closely, you would see the rage building on our faces. Just this morning, I saw the children of these pretentious brutes tear the limbs from one of our own and wave them around triumphantly; clashing the severed appendages together as they feigned a fight between each other, cackling madly all the while. Their mother smiled, as if there was no cause for concern for what her little monsters had done. She simply ushered them away, leaving the amputated extremities haphazardly on the ground. We all watched in horror, paralyzed and disgusted.

Night fell and the overstuffed room was dimly lit by only emergency lights and a few EXIT signs. The horde had disbursed and we roamed freely – repairing our wounded. Upon further inspection of the carnage, I’d made my final decision. By tomorrow we would no longer be disposable shadows. We had plucked one of the more pompous specimens from the crowds while no one paid attention and hid her between the racks. I strode behind a check out counter and retrieved a box cutter while the others dragged our guest into the open. I held the blade out so the cowering woman could see what was walking towards her. While my friends circled around us, I crouched down to her level; the same woman who’d smiled at her children’s violence would understand agony, of that I was certain.

A bit unsure of what I was doing at first, I began making crude incisions, her yelps of pain were music to my ears. A copper fluid flowed from every wound. She cried, screamed for help, but no one would be coming. I plunged the box cutter into her neck and instantly became coated in the ruddy liquid. She went limp, there were no more screams. I cut into her scalp and beckoned to my friends for help cracking her skull. Her rose colored brain exposed, and slightly throbbing – I grabbed it. Everyone watched as I placed it atop of my own head and ambled towards the display window.

With as much force as I could muster I whipped her broken skull remnants through the glass. Blood spattered and wearing my new accessory, I returned to my regular position. The broken glass and twinkling alarm lights caused me to look even more glamorous than ever.

Lydia grew up in a small, ‘Mayberry,’ sort of town, in New Jersey. She thoroughly enjoys gummy bears and laughing through the darkest depths of life. More often than not, she writes about demons and monsters, however, being a recovering addict tends to turn inner demons into fearsome foes to be fought beyond the constraints of the mind. ‘Sometimes,’ she states, ‘what’s inside, is scarier than anything reality throws at you.’