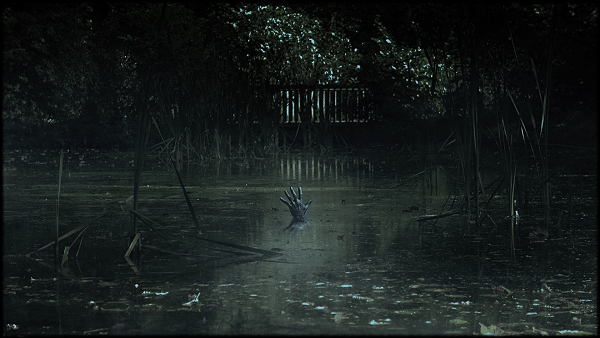 Coming upon her was like falling into a dream.

One minute he was sneaking through the reeds, hunting waterfowl. The next moment he emerged to see a part of a woman laying across a log.

She was an optical illusion, her upper half languidly sprawled across the rotted wood. Her eyes were half closed, sensuously, and she was smiling. A hand slid up her pale stomach to cup her breast and with the other, she combed her fingers through her wet hair. She was sunning herself after a swim.

Her lower half was the part that confused him. Slick, black scales had swallowed her up to her hips. He stood trying to make sense of it, her lack of concern at her obvious peril stunned him to inaction.

He stood up straight in the reeds to get a better view and her eyes snapped open. Twin emerald beacons, the color of algae in the afternoon sun, pierced him before she flipped off the log and vanished beneath the murky surface. All of her was gone, the woman half and the… rest.

“Hey,” he called out in a hushed voice. “Didn’t mean to startle you. Do you need help?”

The stagnant water was still long enough that he began to think the whole thing was a trick of the marsh and he let himself relax. He walked partially into the water, protected by his tough canvas waders, to look at the log.

Then there she was, peeping up from the other side of the slick wood. Her brilliant eyes took him in, unafraid and curious. Her face was pale, like new milk, and framed in the tangled fingers of her dark hair. Bits of leaf and branch entwined with the tendrils, giving her the look of a forest creature from a book.

“Are you okay?” His voice quivered, hesitant to frighten her away. She blinked at him, bit her pale lip and moved around the log, to approach him. She moved with the water and it slid off her skin, swirling around her like a living thing.

“There you go. I’m friendly…” He held out his hands to her, palm up. He didn’t know what exactly he was looking at, and he didn’t care. All he could take in was her glistening nakedness, the glowing green of her eyes and the dark hair that trailed behind her in the water like a dark bridal veil.

He held his hands out. She paused, almost within touching distance, and gave him a coy look. She was close enough that he could see the tiny drops that clung to her lashes. Her lips parted and a row of bone white teeth peeked from her slim smile. He waggled his fingers out, as if to a small animal.

Then she was in his embrace, slipping between his outstretched arms to slide against his rough flannel jacket. A rush of heat flickered up from the soles of his feet, boiling his insides and his throat went dry. He had expected her to be afraid and hesitant.

“That’s right,” he whispered into her wet hair. She was all over him, arms slipping up around his neck, mouth nuzzling him. Her body coiled around his legs and she started pulling him down into the water with her.

“Now hold on… I got a truck parked just up the way if you’re getting any ideas.” He was panting, eyes glazing as the blood fled his mind to attend to more urgent matters. He fell into the water with her, throwing out a hand to catch himself but there was nothing but water and reeds.

He went down, slipping in the deep mud and tried to right himself. The current was working with her, pulling him deeper as she pinned his arms with her embrace. He opened his eyes and struggled to see in the water, tinted tea brown from the cedar roots that drank there.

A flash of white skin and a glimmer of sharp teeth too close to his face caused him to kick out reflexively and for an instant he was free floating, twisting in the water, seeking surface. One hand broke the surface, a final grasp at light and life, then a shadow slid around him, coiling around his neck, pulling him to darkness.

A Sandhill Crane screamed and took wing before silence settled over the marsh. A few air bubbles escaped as some creature burrowed into the mud below and then all was still as the marsh returned to waiting. 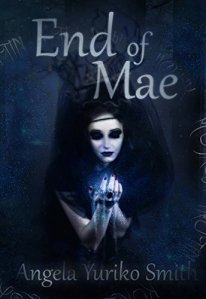 Mae was small town newspaper reporter with bigger dreams. Her life’s passion was to find the ultimate story. When the local homeless start vanishing, her community puts the blame on the Jersey Devil legend. Excited at the prospect of finally uncovering a big story, she spends the night in the woods with a homeless woman. Mae discovers that the whispers are true — there is something sinister wandering the Whitebog area at night. Little did she know that the ultimate story would be her own… and she’d by dying to tell it.

Nina D’Arcangela is a quirky horror writer who likes to spin soul rending snippets of despair. She reads anything from splatter matter to dark matter. She's an UrbEx adventurer who suffers from unquenchable wanderlust. She loves to photograph abandoned places, bits of decay and old grave yards. Nina is a co-owner of Sirens Call Publications, a co-founder of the horror writer's group 'Pen of the Damned', and if that isn't enough, put a check mark in the box next to owner and resident nut-job of Dark Angel Photography.
View all posts by Nina D'Arcangela →
This entry was posted in Authors, Dark Fiction, flash fiction, FREE, Horror, Ladies of Horror, Writing Project and tagged Angela Yuriko Smith, author, fiction, flash fiction, Horror, Ladies of Horror, picture prompt, Writing Project. Bookmark the permalink.