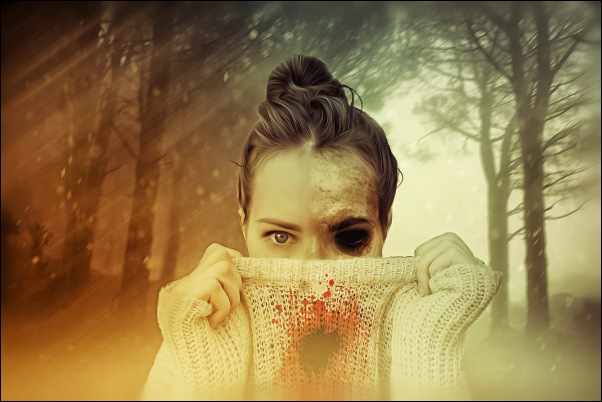 “I have something to tell you, Cindy,” I said.

The abandoned wood lay silent around us as we walked. Chill air had robbed it of bird and insect song. The only melody which accompanied us was the swish of dry leaves.

Cindy’s face fell. She quickened her pace, hugging her arms as she walked. I rushed to catch up.

Cindy halted. A few flakes of snow drifted down from the darkening sky and caught in her hair.

She squinted at me and the color rose into her cheeks. I steadied myself for the storm of fury she seemed ready to unleash but it never came. Instead, a sad smile curved her lips.

“You needn’t worry. I won’t do anything foolish.”

A cold, leaden weight pressed against my stomach. I shook my head.

The wind picked up then. It whipped at my hair and Cindy’s skin. She lifted the collar of her white sweater and covered the lower half of her face.
The vision I’d experienced for the past three days assailed me again. Half of Cindy’s countenance transformed into bleached bone as her pink flesh fell away. Her left eye became a black void and blood blossomed across the sweater. A hole as dark as her empty eye socket appeared at the center of the crimson.

“Let her come,” Mason said, his words swelling within my mind. “She wants to come. Wants to be my love.”

The vision faded the moment Cindy touched me. I blinked as she took my hand.

“Please,” she said. Tears shone in her eyes.

Cindy released me and took a step back. Her eyes widened.

“Leah, are you alright? You’re scaring me.”

I shook my head. My eyes blurred.

She grasped me by the arm and dragged me forward.

“Your mom said you didn’t go. She said you wouldn’t admit it. Is this why you won’t allow me to see him? Why you kept me away?”

I didn’t answer. A presence squirmed within my mind. The intruder didn’t belong.

Cindy led me up the hill and through the wrought iron gate. She walked me down the gravel path and didn’t stop until we reached the headstone.

I fell to my knees beside the grave and Cindy laid a hand on my shoulder. She spoke but I could barely make out the words.

“I know you blame me for his death, Leah. And, God knows, I blame myself. I should’ve driven him home that night. I shouldn’t…”

Her words grew fainter as white noise filled my ears.

The cold and heavy weight near my stomach had become unbearable. I reached down and my fingers encountered a strange, metallic object. I pulled it from the waistband of my jeans and white noise enveloped me once more.

A single word pulled me back to reality.

Cindy lay on the ground and I stood above her, hands stretched out before me. They were too large and masculine to be mine, but I could feel the pistol they held.

My brother’s voice filled the air as his voice left my lips.

The pistol bucked. Two shots filled the air. They reverberated throughout the cemetery.

It’s the Final Masquerade and it’s your turn to dance.

The evening is ending and the guests are ready to leave, but the final event of the evening is just beginning — the unmasking.

Welcome to Final Masquerade where no one is who they seem.

Nina D’Arcangela is a quirky horror writer who likes to spin soul rending snippets of despair. She reads anything from splatter matter to dark matter. She's an UrbEx adventurer who suffers from unquenchable wanderlust. She loves to photograph abandoned places, bits of decay and old grave yards. Nina is a co-owner of Sirens Call Publications, a co-founder of the horror writer's group 'Pen of the Damned', and if that isn't enough, put a check mark in the box next to owner and resident nut-job of Dark Angel Photography.
View all posts by Nina D'Arcangela →
This entry was posted in Authors, Dark Fiction, flash fiction, FREE, Horror, Ladies of Horror, Women in Horror Month, Writing Project and tagged author, fiction, flash fiction, Horror, Ladies of Horror, Naching T. Kassa, picture prompt, WiHM9, Writing Project. Bookmark the permalink.