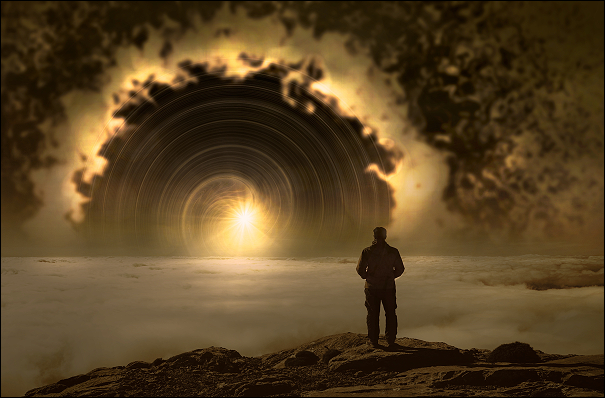 So where was you when the world ended? Me and my buddies Mac and Waylon was out fishin’ in the bay out past Fishkill Point. Miss Barnes, my tenth grade English teacher – and the only one who didn’t wash her hands of me as a lost cause, bless her — woulda called that irony.

The first explosion lit up the sky about noon. It dimmed the sun, man. I thought maybe the North Koreans had finally lost their cool and set off some kinda nuclear flash-boom.

Waylon screamed like a girl. Mac started cussin’ just like he wasn’t some sorta born-again Bible thumper these days. I ain’t ashamed to say I peed my pants.

And then the next flash-boom hit. And the next. By then, we was all lyin’ in the bottom of the St. Pauly’s Girl (yeah, I named my boat after me and my favorite brew, and, yeah, I know it ain’t spelled that way) pissin’, cryin’, and prayin’.

That’s when the fish started dyin’. The bay was boilin’, man. The fish was jumpin’ outta the water, tryin’ to escape. I knew how they felt ’cause the bottom of my Girl heated up like a double-boiler.

“We gotta get outta the water, Paul!” Mac yelled at me like he was sayin’ somethin’ I hadn’t already thought.

I headed for Fishkill Point, fish jumpin’ and dyin’ all around us. I pushed the Girl full-out, her motor roarin’ and strainin’. We ran right up onto the beach ’cause nobody wanted to hop out into that boilin’ water. The Girl screamed when her bottom scraped against the rocks and sand. Mac, Waylon, and me all climbed out.

Waylon dragged out the cooler with the beers ’cause he wasn’t facin’ nothin’ without a buzz on. Anyone who knew him wouldn’ta raised a eyebrow at that.

Didn’t take long till we knew it wasn’t the NKs. Some kinda weird-ass portal opened up, and They stepped through. Mac lost his nerve and ran into the bay, screamin’. I never heard a sound like he made then. I’m glad I never will again.

Waylon slammed down a coupla cans of Bud and stuck his fish-guttin’ knife in his throat.

Me, I stood next to my Girl, watching Them stalk across the bay, Their alien, long-legged assault craft closing in.

Right till the end.