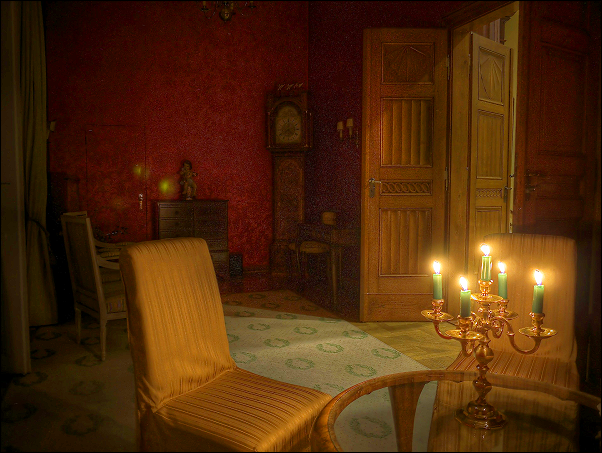 Janey walked into the house and threw her backpack on the couch.

Silence greeted her. “Yes! she said, pumping her fist in the air. She ran into the kitchen, grabbing a soda and yogurt tube from the fridge, then sat down at the kitchen table. She opened her mom’s laptop, and typed in the password her parents had no clue she knew.

The haunted house game Janey loved came to life with a click of the mouse. Her mother password-protected her laptop after realizing Janey was obsessed with the game. She let Janey play a couple times a week, but only after her homework and chores were done. But with her parents both working late, Janey took advantage, and sixth-grade math could wait.

She had found the link while surfing a horror site and downloaded the game since it was free. Six hours later, her dad was telling her to get off the computer and into bed. Janey dreamed about Horror House that night, walking through the manse, solving puzzles while she slept.

Although she enjoyed figuring out the puzzles that opened more doors in the house, Janey’s favorite part of the game was just exploring rooms. The graphics made everything seem so real, she could practically smell the burning candles and hear the grandfather clock ticking away the hours. Sometimes she would open a closet and discover interesting things like diaries or pictures. They just added to the mystery she was supposed to solve.

Janey was close to finishing the game. She hoped for a sequel, but would re-play this one if she had to. She had probably missed stuff anyway.

She slowly moved the mouse around on its Walking Dead pad, hoping to see something new. A creaking sound caught her attention, and she zoomed in to see a door ajar to a room with a black cat sleeping on the bed. Janey entered the room, and clicked on the cat to see what would happen. The cat woke up and mewed at Janey. The cat’s fur was sleek and shiny, and Janey could actually feel the softness.

She was scratching the cat under her chin when the door slammed shut behind her.

OK, that was a little spooky, but still cool.

Janey moved the mouse, pointing to where she had come in, but the door was gone. She swept the mouse around on the pad, looking throughout the room, but the door had disappeared and there were no windows.

Oh, wait – I probably need to solve a puzzle to get out of here.

She opened desk drawers, a wardrobe, and even looked under the bed, but found nothing.

I need to log out of this game and Google how to exit the cat room.

She couldn’t get out of the game, though; even pressing the ESC button did nothing.

What is going on? Did the game freeze?

Janey looked at the cat again; it had gone back to sleep. She could see its body rising and falling with each breath, so she knew the game wasn’t frozen.

The grandfather clock in the living room chimed the hour, startling Janey into dropping the mouse. She decided to just close the laptop; her parents would be home any minute. She reached out to the laptop, but her hand went through it, as if the computer were made of mist.

“Mom? I’m sorry I’m on the game, but something is wrong…”

Janey’s voice faded into nothing as her mom walked into the kitchen. The laptop was on, but Janey wasn’t there.

“Damn it, how did she get into my computer?” She shut the laptop, not seeing her daughter screaming and hitting the other side of the screen.

It is the Halloween holiday season and that means Spooky Halloween Drabbles 2016! These drabbles will keep you entertained and amused throughout!

Werewolves, vampires, ghosts, fairies, djinns, goblins, trolls, witches, brownies, banshees — all sorts of weirdlings are on the prowl in these spooky drabbles.