To untangle the coming night, I must succumb to savage needs. Those of the past are what led me here, to the darkest place any musings could fabricate. Deeds of the future would define what I already became. Salvation is futile, as are my attempts to subdue the raging monster pulling me out into the autumn evening.

Each year I think of tales spoken by my former peers… The ones which told of Hell Mask, devourer of children. We always stayed in the light when trick or treating, all afraid to stray. But I never believed the stories. And so I stepped into the dark, alone, testing my theory.

Little did I know I would not be eaten. But rather transformed, replacing the old and withered creature. It had been ready to die. But the legend could not. And so I became…

My heart might regret that decision, but sorrow is useless now. Only the hunger matters, the relief, the hunt for scents of fear behind those plastic masks. One always peers into the shadows, curiosity overpowering superstition. And there I’m always waiting, feeding until I’m full. 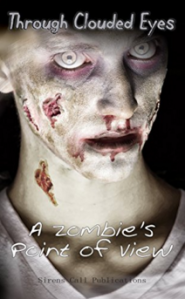 Through Clouded Eyes: A Zombie’s Point of View

Through Clouded Eyes: A Zombie’s Point of View: a collection of twelve stories told from the Zombie’s perspective.

They’re shambling toward you, feet dragging on the broken roadway. Arms outstretched, faces slack, they move as if they’re tracking your scent on the wind. You want to run, but you know there’s nowhere to hide.

Aware of their insatiable hunger, fear paralyzes you. These things were once human, people someone loved. Is there anything left inside them – some sliver of humanity that may save you from this nightmare? Your mind doesn’t want to accept the inevitable, a single thought consumes you: what are they thinking?

With your chance of escape dwindling, you snap out of it and run like hell knowing there is little to no hope; fate is coming for you. Soon you will see what they see Through Clouded Eyes…

Nina D’Arcangela is a quirky horror writer who likes to spin soul rending snippets of despair. She reads anything from splatter matter to dark matter. She's an UrbEx adventurer who suffers from unquenchable wanderlust. She loves to photograph abandoned places, bits of decay and old grave yards. Nina is a co-owner of Sirens Call Publications, a co-founder of the horror writer's group 'Pen of the Damned', and if that isn't enough, put a check mark in the box next to owner and resident nut-job of Dark Angel Photography.
View all posts by Nina D'Arcangela →
This entry was posted in Authors, Dark Fiction, flash fiction, FREE, Horror, Ladies of Horror, Writing Project and tagged author, Elizabeth H. Smith, fiction, flash fiction, Horror, Ladies of Horror, picture prompt, Writing Project. Bookmark the permalink.