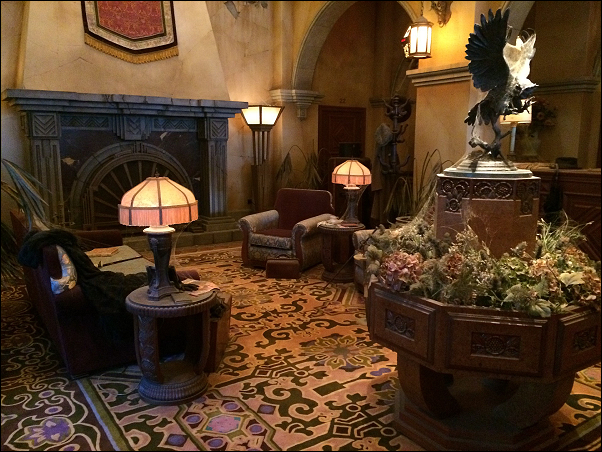 A Room with No View
by Mary Ann Peden-Coviello

“Yes, my dove. The listing sounded like a real fine get-away.” Felix retrieved the brochure from his coat pocket and read aloud.  “‘A unique, one-of-a-kind romantic destination. Once a lavish Victorian mansion, now a lovely, distinctive full-service hotel.  Each bedroom boasts a view of Lake Hyacinth and overlooks the Hyacinth House Maze Gardens.’ It sounded so . . . nice.”

“All right, Felix, as you’ve booked us into this ‘unique, one-of-a-kind’ dump – no doubt without an option for a refund – we might as well check in.” Marlene stomped to the reception desk, her substantial bulk raising an unsettling cloud of dust from the faded Persian carpet. A meaty fist battered the call bell half-a-dozen times.

Felix flinched at each angry jangle of the bell. With a sigh, he hauled up the suitcases and trudged behind his wife to the desk. Of the four pieces of luggage, only the smallest was his.

A slender, dark-haired woman poured into a strapless maroon dress glided from somewhere to stand behind the mahogany reservation desk. “May I help you?” Her voice hinted at late nights, champagne, and illicit pleasures.

“We have reservations. Mr. and Mrs. Hammersham,” Marlene snapped.

Minutes later, a uniformed bellman opened the door to Room 666 and allowed Marlene to enter. She waddled in with a sniff of disapproval.

He promptly slammed the door behind her and, with a deep bow, handed the ornate metal key to Felix. The bellman left Felix alone, suitcases at his feet.

The sounds began within moments. Growls. Snarls. Screams. Then silence interrupted only by the cracking of bones and tearing of flesh.

Felix took his lone bag and returned to the front desk. The sexy, dark-haired woman smiled, a close-mouthed curve of her ruby red lips.

“Ah, Mr. Hammersham, may I assume our Black Dog service met with your approval?”

“Yes, indeed. You cannot imagine what a relief this is.” Felix set the key to Room 666 on the desk.  “I understand that my, um, date is waiting for me in the center of the Maze?”

Felix hastened out the front door, disturbing cobwebs as he went, and entered the Hyacinth House Maze. Just before he vanished from sight, he stopped and brushed back his thinning hair with his hands. Must look nice for his date.

The maroon-clad woman leaned on the front desk and sighed in something like contentment. She was joined a moment later by an extravagantly blond man, pale and effete.

“The Minotaur is waiting hungrily, I assume?” the blond man asked.

“Indeed. He won’t like Mr. Hammersham much, I fear, but beggars and choosers these days, you know?”

“Hmm. Have we ever had a double booking like this one?”

A high-pitched wail reached their ears.