Screams The Machine
by Sam Mortimer

Cash carries a disease; one that’s already killed a large majority of the population and something needs to be done. To stop the crisis from escalating, The Solution (a worldwide organization) is formed and rises to great power. They monitor people’s dreams and shape reality to fit their own wants and needs. In an effort to control existence itself, The Solution is searching for what they believe to be the ultimate tool; a person with the ability to master a deep connection with the mysterious, pervasive energy known only as The Ultimate Reality.

Watching her neighborhood decay, her friends and family perish, Elizabeth Reznik needs to find meaning in her life. She discovers her existence is more meaningful than she could ever have imagined. Operatives of The Solution seek her out, take her from her home and perform brutal experiments on her. Their conclusion? Elizabeth is the one they have been searching for; she is the key to gaining complete power.

The stratagem of The Solution is single minded – own the resources and you own the people. And the last resource available is free will. They will own your thoughts, they will orchestrate your dreams; they will dine on your fears. But there is always a cog in the machine… or in this case, a scream. 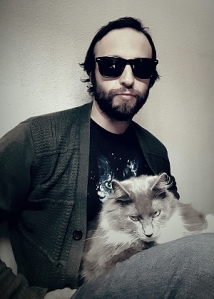 Sam Mortimer has worked the graveyard shift in law enforcement, attended film school, and has been writing strange stories since age eleven.

He loves reading, music, and strives to meet the demands of his five cats.

Nina D’Arcangela is a quirky horror writer who likes to spin soul rending snippets of despair. She reads anything from splatter matter to dark matter. She's an UrbEx adventurer who suffers from unquenchable wanderlust. She loves to photograph abandoned places, bits of decay and old grave yards. Nina is a co-owner of Sirens Call Publications, a co-founder of the horror writer's group 'Pen of the Damned', founder and administrator of the Ladies of Horror Picture-prompt Monthly Writing Challenge, and if that isn't enough, put a check mark in the box next to owner and resident nut-job of Dark Angel Photography.
View all posts by Nina D'Arcangela →
This entry was posted in Authors, Blog Tour, Dark Fiction, Novels, SciFi, Sirens Call Publications, Speculative Fiction and tagged book, dystopian fiction, Horror, Novel, Sam Mortimer, sci-fi, Science Fiction, Screams the Machine, Sirens Call Publications, Speculative Fiction. Bookmark the permalink.