Mina tugged at the gym sweatshirt the front office had forced on her, pulling it away from the sweat coating her chest. The room was sweltering—as usual, the school air conditioner wasn’t working, and the unseasonably hot May day converted the cement school building into a solar oven. Only hotter.

She’d been stopped in the senior hallway on the way to first period, Mrs. Sweeney’s imperious voice carrying through the halls. “Mina Jepsen. Come back here now.”

She’d had to fight off embarrassment when she turned around and walked to the front office secretary and self-appointed dress code nazi. She’d given Mina a once-over and, loud enough to carry to the snickering cluster of boys passing by, announced, “You’re a distraction. How will boys learn if you dress like that?” Mrs. Sweeney had swept her hand up and down Mina’s length, like she thought even the sticky jeans were too revealing. And then she’d dragged Mina into the front office and forced her to don a Danford High Roaring Dragons sweatshirt.

As far as Mina was concerned, the old bitch could die in a fire.

She’d worn the tank top because it was too damned hot to wear anything else. Even Mr. Johnson had removed his tie, unbuttoned his shirt, and rolled up his sleeves, and perspiration still beaded along his hairline.

Sweat crept down her back and slid between her butt cheeks. Mr. Johnson droned on about some war during the Medieval period, but she couldn’t concentrate on anything he said. She felt like she was burning up from the inside. Like kindling smoldered right in her chest. Nothing could have pulled her attention back to his lecture, not even if the war he recounted had raged between fantastical beasts and ordinary humans.

“Mina?” Mr. Johnson asked, and the kids on either side of her turned to look.

She tried not to panic. Had he asked a question, and she’d missed it? “Uh…”

“Are you okay? You look like you feel ill.” His brows drew together, like maybe he gave a crap. But she knew better. He was a tool of the staff. He knew why she wore the sweatshirt, and he hadn’t said a word.

As far as she knew, she could be a distraction to him, too, the perv.

“I’m fine!” Her insistence didn’t sound unreasonable to her ears, but the way Mr. Johnson and her neighboring students cringed away, she knew she must have yelled it. Embarrassment crept up her chest and warmed her cheeks, if that were even possible. They already felt like they were ablaze. “Sorry.”

Her friend Caitlyn two desks to her right gave her a wide-eyed WTF look. And that made her ears burn.

“Well, you tell me if you change your mind,” her teacher said and turned back to the white board. He drew lines across the board with a red marker, joining squiggles that must be words, but she couldn’t read them anymore. It was all nonsense.

This sweatshirt. She glanced down at the bulky material but couldn’t stare too long. It was bright white where there was no cartoonish dragon and text, too bright, and it burned her eyes and left an after-image when she stared at the white board. But she couldn’t ignore its light, so bright it felt heavy and suffocating at the bottom of her vision.

As Mr. Johnson scribbled squiggles and lines on the board, and his words morphed from English to nonsensical babbling, the weight of the shirt grew until she couldn’t stand it anymore. She tugged it hard over her head, squeaking when the tight neck caught on her ears and yanked them free.

Immediately, her skin dried, but it was still so, so hot. Her hair stuck to her face, but when she pushed it back, it crumbled in her hands, leaving singed pieces behind. She ran her hands over her head and smiled when her scalp was liberated, smooth, and lighter than it had ever felt.

Without a word, she stood from her desk and walked to the classroom door. The students around her mumbled, and Caitlyn stood and called out something—her name, perhaps?—but Mina tugged open the door and walked out, not even stopping when Mr. Johnson yelled down the hall.

She did stop when she glanced down, curious why her legs suddenly felt unconstricted and cool, and found her jeans in burnt-edge tatters. Her shirt, too, had developed holes edged in soot, and the bottom half had completely burned away, baring her midriff.

And though she finally felt blessed relief from the heavy blanket of heated air, her skin smoldered, bright and mottled like glowing coals hid just beneath. She felt the fire burning in her, hot, writhing, and ready to consume. It was no longer uncomfortable, but it whispered to her, invited her to let it loose, crooned about freedom.

So she headed straight for the front office. If she was going to burn, that was where she needed to be. 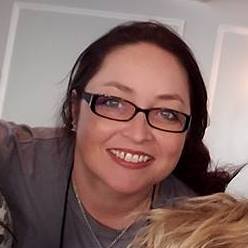 Kerri-Leigh Grady is a graduate of Seton Hill University’s MFA program and holds a BS in computer science. She’s a nerd with an unnatural love of dark humor, gadgets, chickpeas, cross-choking her friends, goofy ghost investigation shows (especially when someone’s screaming like a five-year-old), archery, and silversmithing. This week, she lives in Hawaii.

The single most powerful word in our democracy is the word ‘We.’ ‘We the People.’ ‘We shall overcome.’ 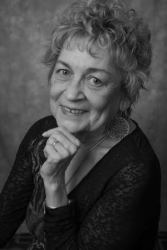 Nina D’Arcangela is a quirky horror writer who likes to spin soul rending snippets of despair. She reads anything from splatter matter to dark matter. She's an UrbEx adventurer who suffers from unquenchable wanderlust. She loves to photograph abandoned places, bits of decay and old grave yards. Nina is a co-owner of Sirens Call Publications, a co-founder of the horror writer's group 'Pen of the Damned', and if that isn't enough, put a check mark in the box next to owner and resident nut-job of Dark Angel Photography.
View all posts by Nina D'Arcangela →
This entry was posted in Authors, Dark Fiction, flash fiction, FREE, Horror, Ladies of Horror, Writing Project and tagged author, fiction, flash fiction, Horror, Kerri-Leigh Grady, Ladies of Horror, picture prompt, Writing Project. Bookmark the permalink.