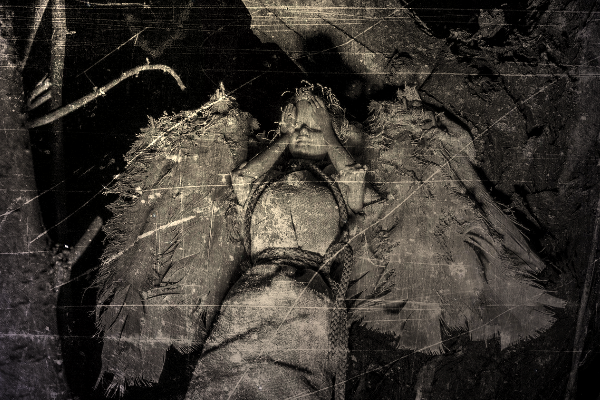 Bleeding unholy blood onto forgotten ground, my monument to failure lies alone. Ventures of glory withered and gone, I atone in immortal suffering. Beauty once held a soft visage in my eyes. But they are now stone cold, vacant of the brilliance which previously flared within. I have no home. No place of rest. Only the ruins of a glory misremembered.

Shame, my final companion, even tries to flee. I embrace this vestige of life with what paltry strength I have left. But it too will abandon me, same as those deluded souls who knelt before my grace some time ago.

As I crumble, begging to feel the sun on my unmoving remains, I only wish to quicken my decline to oblivion…

Through Clouded Eyes: A Zombie’s Point of View

Through Clouded Eyes: A Zombie’s Point of View: a collection of twelve stories told from the Zombie’s perspective.

They’re shambling toward you, feet dragging on the broken roadway. Arms outstretched, faces slack, they move as if they’re tracking your scent on the wind. You want to run, but you know there’s nowhere to hide.

Aware of their insatiable hunger, fear paralyzes you. These things were once human, people someone loved. Is there anything left inside them – some sliver of humanity that may save you from this nightmare? Your mind doesn’t want to accept the inevitable, a single thought consumes you: what are they thinking?

With your chance of escape dwindling, you snap out of it and run like hell knowing there is little to no hope; fate is coming for you. Soon you will see what they see Through Clouded Eyes…

Nina D’Arcangela is a quirky horror writer who likes to spin soul rending snippets of despair. She reads anything from splatter matter to dark matter. She's an UrbEx adventurer who suffers from unquenchable wanderlust. She loves to photograph abandoned places, bits of decay and old grave yards. Nina is a co-owner of Sirens Call Publications, a co-founder of the horror writer's group 'Pen of the Damned', and if that isn't enough, put a check mark in the box next to owner and resident nut-job of Dark Angel Photography.
View all posts by Nina D'Arcangela →
This entry was posted in Authors, Dark Fiction, flash fiction, FREE, Horror, Ladies of Horror, Writing Project and tagged author, Elizabeth H. Smith, fiction, flash fiction, Horror, Ladies of Horror, picture prompt, Writing Project. Bookmark the permalink.