I spy on the passers-by as they scurry past, some pause briefly to take pictures before hurrying along, spooked by some frisson of fear they cannot explain. Others enter the courtyard to marvel naively at the history around them. “Centuries old! Can you believe the things these stone walls must have seen?” they whisper with childlike awe.

Centuries? If I could still smile I would. I have been around much longer than they can fathom, much longer even than this insignificant rock they call Earth. First born daughter of Lilith herself, I have witnessed millennia, the very formation of the solar system which so intrigues them. I have fought in thousands of wars waged by Gods so ancient none even remember their names… none but I that is.

I, named ‘Dark Angel’ by my beloved mother before she was stabbed through her heart with the dagger of origin. I, who spent eons seeking out my revenge before I was ambushed and trapped in this statue by that same traitorous she-devil who ended my mother’s reign. Frozen in stone to forever watch the days bleed into the nights, choking on my rage. I yearn for the day where the magick binding me will weaken, and then I will finally find her and tear the treacherous heart right out of her, evil incarnate herself – my little sister… 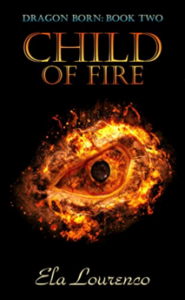 The darkness is rising; the shadows on Azmantium grow stronger with each passing day. Only one can hold back the tides of destruction – only the Chosen One can walk the path of light – the Child of Fire…

The ever brave Lara, still reeling from the revelation surrounding her origins, will be plunged head first into the plotting schemes of several secret factions as each side battles to win the sacred Karnac – the ancient and perilous tournament to decide the future King. Lara must overcome her fear and embrace her true self if she is to learn how to control the power boiling under her skin, and evolve into what she was fated to be.

Treachery and deceit loom over her every step, her path embedded with traps and danger, will the support of friends, old and new, give Lara the strength she needs to stay on the path destiny has chosen for her?

Nina D’Arcangela is a quirky horror writer who likes to spin soul rending snippets of despair. She reads anything from splatter matter to dark matter. She's an UrbEx adventurer who suffers from unquenchable wanderlust. She loves to photograph abandoned places, bits of decay and old grave yards. Nina is a co-owner of Sirens Call Publications, a co-founder of the horror writer's group 'Pen of the Damned', and if that isn't enough, put a check mark in the box next to owner and resident nut-job of Dark Angel Photography.
View all posts by Nina D'Arcangela →
This entry was posted in Authors, Dark Fiction, flash fiction, FREE, Horror, Ladies of Horror, Writing Project and tagged author, Ela Lourenco, fiction, flash fiction, Horror, Ladies of Horror, picture prompt, Writing Project. Bookmark the permalink.