Why not give the 2017 Brain to Books CyberCon a try?

We’ve already signed on nearly 200 authors. Plus we’re giving away prizes to some of the lucky attendees — your book could end up in one of their hands!

Stop by the Brain to Books Cyber Convention and Book Expo web site for details on how and where to sign up.

Don’t miss out on the opportunity or the fun! 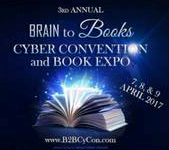