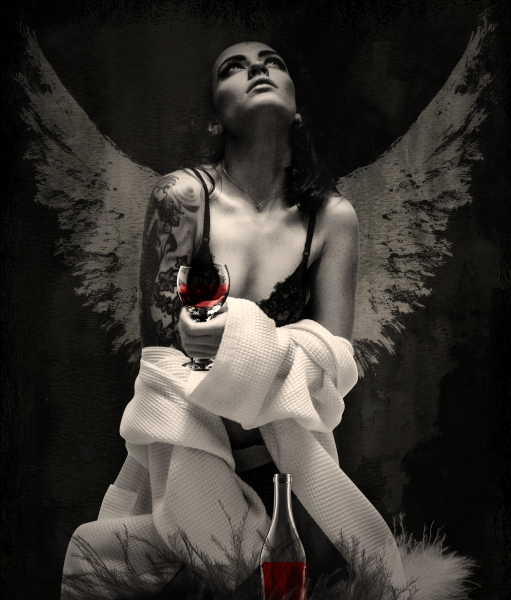 Rough Night on the Job
by Bailey Hunter

Naziel poured herself a full glass of Malbec and lit a sobranie cigarette. Such pleasures never used to cross her mind, but since being assigned to Malcom Wasserman, it was all she thought about.

After two millennia as a guardian angel, she hadn’t lost a single charge to anything other than natural causes. There had been a few challenging ones, sure, and guarding a killer is always more difficult, but Malcom…

Normal assassins are quiet. Get in, get out. They’re organized so their GA only has to handle the unforeseen moments. Not Malcom. He was a tsunami of destruction and violence. His way was to create as much chaos as possible so that by the time the investigators even started to piece together what happened, Malcom would be long gone.

Tonight was another rough one. First Naziel had to protect him from blowing himself up due to a faulty detonator, and then stop him from slipping in the pool of slick blood and intestines he left on his latest victim’s marble floor. He nearly impaled himself on his own sword, for chrissake.

Naziel shook her head and took a long drag from the slender black cigarette. She was babysitting a homicidal three year old.

At least Malcom was safe, for now. Too bad she had to kill Thelon to do it. It broke her ageless heart to take a fellow GA’s life, but it happens sometimes when they come up against each other, trying to protect their charge. It was only a matter of time until Naziel would be on the losing end. Malcom Wasserman would be the death of her.

Naziel lifted her glass to her fallen colleague; she would drink the bottle of wine, smoke her pack of cigarettes, and prepare for when Malcom woke up.

More about Bailey Hunter:
Bailey would like to feature her publishing company, Dark Recesses Press.

Dark Recesses Press was originally a fiction magazine of dark fiction, art, and non-fiction.  After a quiet death, she is now rising from the ashes.

DR will be focusing her attention now on novels, collections and anthologies born in the dark corners of your mind.

We are currently under re-development, so please be patient as we dust off the ashes and rebuild. 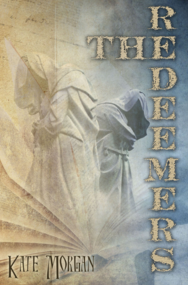 Long after the Great War, life flourished again, due to The Redeemers’ help and guidance. It was a simple life, but a good one. Annie’s world made sense…until one fateful day when everything of value is ripped from her. With nothing left to lose, Annie embarks upon a quest for the dark, disturbing truth of why – never imagining how deep the trail leads.

And don’t forget to visit the Women in Horror Month official web site
for more great WiHM8 events and posts!

Nina D’Arcangela is a quirky horror writer who likes to spin soul rending snippets of despair. She reads anything from splatter matter to dark matter. She's an UrbEx adventurer who suffers from unquenchable wanderlust. She loves to photograph abandoned places, bits of decay and old grave yards. Nina is a co-owner of Sirens Call Publications, a co-founder of the horror writer's group 'Pen of the Damned', and if that isn't enough, put a check mark in the box next to owner and resident nut-job of Dark Angel Photography.
View all posts by Nina D'Arcangela →
This entry was posted in Authors, Dark Fiction, flash fiction, Horror, Women in Horror Month and tagged author, Bailey Hunter, fiction, flash fiction, Horror, picture prompt, WiHM2017, WiHM8, Women in Horror Month, Write Her Story. Bookmark the permalink.