Viscera – A short story collection by Jessica B. Bell @Sotet_Angyal 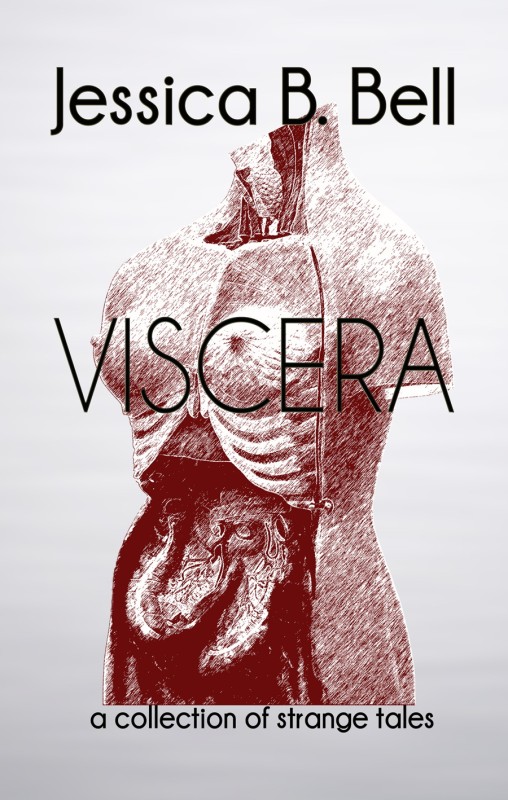 Viscera is a collection of short stories full of all the things that make you squirm, cringe, and laugh when you know you shouldn’t. You’ll remember why you’re afraid of the dark and experience an abundance of weird creatures: witches, ancient gods, and all-too-human monsters – the scariest of all.

Indulge your twisted sense of humor with stories about unconventional werewolves and a woman with a frog fetish. Know what it’s like to arrive too late to save an unusual alien abductee, or giggle with sick delight as a woman serves up a special Hasenpfeffer dinner to her pig of a husband.

Settle in for bedtime stories fit for monsters.

Viscera will grab you by the gut and squeeze, making you cry for mercy—or laugh like a fiend!

Jessica B. Bell is a Canadian writer of strange fiction. It is rumoured that she lives in a damp, dark basement, writing her twisted tales in her own blood on faded yellow parchment. Her stories have been published in various anthologies, the most recent of which is Voices. She also writes under the name Helena Hann-Basquiat, and has published two novels on the metafictional topic of Jessica B. Bell, titled Jessica and Singularity. A third and final novel is planned for 2017.

Find more of Jessica’s (and Helena’s) writing at whoisjessica.com

Nina D’Arcangela is a quirky horror writer who likes to spin soul rending snippets of despair. She reads anything from splatter matter to dark matter. She's an UrbEx adventurer who suffers from unquenchable wanderlust. She loves to photograph abandoned places, bits of decay and old grave yards. Nina is a co-owner of Sirens Call Publications, a co-founder of the horror writer's group 'Pen of the Damned', and if that isn't enough, put a check mark in the box next to owner and resident nut-job of Dark Angel Photography.
View all posts by Nina D'Arcangela →
This entry was posted in Amazon, Blog Tour, Books, Collection, Dark Fiction, Fear, Horror, Short Stories, Sirens Call Publications and tagged blog tour, book, collection, dark fiction, Horror, Jessica B. Bell, short story, Viscera. Bookmark the permalink.

2 Responses to Viscera – A short story collection by Jessica B. Bell @Sotet_Angyal