A proud member of the Horror Writers Association, Naching became interested in the genre as a youngster. Her father introduced her to her first horror movie, “King Kong”, at the age of four and she’s been an avid fan ever since.

Naching draws inspiration from the works of Dean Koontz and Stephen King. Dean is her favorite author because his work encourages hope. It also demonstrates the true strength that women possess.

You can find Naching and her work in the following places:

From the time we are small there are things that frighten us. As children we have the monster under the bed, the monster in the closet, and the monster that is this close to snatching us from behind when we’re on our way up the basement stairs alone, and we can’t look back because if we saw him he’d be real, and he would get us. And as we grow and change the things we are afraid of change with us: in grammar school the monster has moved out into the streets, and we fear “Stranger Danger”; in high school the monsters are inside of us, and we fear failure, and the possibility that we might not fit in; as adults our fears are everywhere, from worry about our jobs to the guy who’s driving erratically in the lane beside us to the silent return of “Stranger Danger”—this time fearing for children of our own. As new fears filter into our lives we try to forget the old ones. But, though they might not frighten us any more, they are never quite forgotten. We all remember the monster under the bed; the monster in the closet. I’m forty-five years old and I still won’t look back on the basement stairs, because I swear to God that son of a bitch is getting closer every time.

Blood in the Rain
Seattle Storm by Naching T. Kassa

In this collection of erotic vampire tales from authors Northwestern and Northwestern at heart, the creatures range from classic to alien, from dom to sub, from blood-drinking to soul-sucking. In Jeff Mann’s “Summer Solstice Sacrifice,” a burly, kilted vampire faces losing a lover or turning him before it’s too late. Colleen Anderson’s “Hold Back the Night” explores how cultural norms divide two very different women in Mumbai—one of them undead. A male vampire watches his wife solve his murder in Joscelyne Gray’s “The Longest Death of the Year.” And Sara Dobie Bauer in “Forever Dead” brings us a muscular, vamp-hunting detective with an uncomfortable hankering for a blood-sucking guy. Whatever your sexual orientation, you’ll find something here for you.

IN SHAMBLES: A SCARLETT NIGHTMARE VOL. 2
The Strength in Tears by Naching T. Kassa 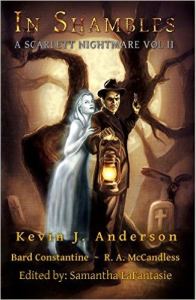 In Shambles … that was my life. I sat in a cell all day wondering what could have been. Thinking about it only made me feel worse. I was lost until someone left me this book about people just like me. People that made mistakes … people that tried to redeem themselves … people that failed. It helped me cope with the things I’ve done. It helped me find peace.

To those whose lives are In Shambles, crack open this book. See what it can do for you …

Nina D’Arcangela is a quirky horror writer who likes to spin soul rending snippets of despair. She reads anything from splatter matter to dark matter. She's an UrbEx adventurer who suffers from unquenchable wanderlust. She loves to photograph abandoned places, bits of decay and old grave yards. Nina is a co-owner of Sirens Call Publications, a co-founder of the horror writer's group 'Pen of the Damned', and if that isn't enough, put a check mark in the box next to owner and resident nut-job of Dark Angel Photography.
View all posts by Nina D'Arcangela →
This entry was posted in Authors, Horror, Women in Horror Month and tagged author, Horror, Naching T. Kassa, Wihm7, Women in Horror Month. Bookmark the permalink.