Dragon Born, by Ela Lourenco – A YA #Fantasy #Novel – #YA #book @elalourenco

Far in the distant reaches of the universe is a world called Azmantium. A planet with lilac skies, jade green seas and fiery red suns. A planet where everything, from the tides of the sea to life itself, is rooted in magic. Children are assessed at an early age and trained according to their unique magical talents.

Lara, an orphan who has no memory of her true origins, is unaware that she has a vital role to play in the ancient prophesies that are about to begin coming true. Older than most who are just beginning their magical training, Lara will soon find out that destiny waits for no one, especially when the fate of the world rests on their shoulders.

With the help of her new friends, Lara will learn that in order to save the future, she must journey into the past – to a time when Dragons ruled the world!

Dragon Born is available from:

About the Author — Ela Lourenco lives in Scotland with her two daughters and husband. She has been an avid reader since childhood and has long enjoyed mysteries, mythology and anything related to the paranormal/supernatural/mystical/science fiction. She loves nothing more than making up stories about faraway people and places (helped somewhat by a mind that just won’t grow up!). When she isn’t nose deep in a book or writing herself she can be found dancing around the kitchen whilst baking. Her biggest wish in life is to infect others with a passion for reading. 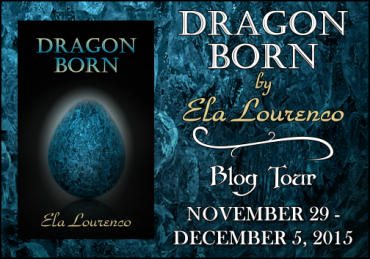 Nina D’Arcangela is a quirky horror writer who likes to spin soul rending snippets of despair. She reads anything from splatter matter to dark matter. She's an UrbEx adventurer who suffers from unquenchable wanderlust. She loves to photograph abandoned places, bits of decay and old grave yards. Nina is a co-owner of Sirens Call Publications, a co-founder of the horror writer's group 'Pen of the Damned', and if that isn't enough, put a check mark in the box next to owner and resident nut-job of Dark Angel Photography.
View all posts by Nina D'Arcangela →
This entry was posted in Amazon, Blog Tour, Books, Dark Fantasy, Dark Fiction, Fantasy, Novels, Sirens Call Publications and tagged Dragon Born, dragons, Ela Lourenco, Fantasy, magic, Novel, YA, young adult. Bookmark the permalink.

2 Responses to Dragon Born, by Ela Lourenco – A YA #Fantasy #Novel – #YA #book @elalourenco