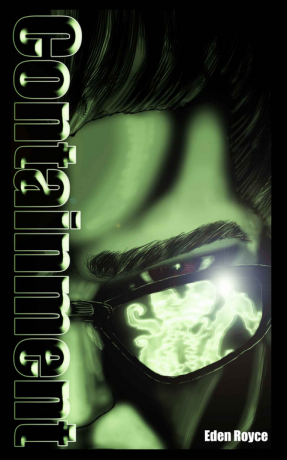 “Life is different among the dead.”

They are kept in chambers, their energy used to feed the City’s voracious appetite for fuel now that traditional sources are long gone. These grisly fuel cells are kept watch over by Feast, a devil-human hybrid whose recent run-ins with the City leave him questioning its authority.

When he is needed to bring in one of the most dangerous creatures for containment, Feast is faced with a decision that may make him the next power source.

“In a world created by Royce, the dead are the renewable energy source. The detached, matter-of-fact way in which Feast, a city employee, tells this story only serves to make the tale that much more unsettling … and heartbreaking.

It’s the exploration of fate and destiny that drives this atmospheric, unforgettable, and haunting story.”

“After the lights go out and the devils walk, the earth becomes a darker place. As envisioned in Eden Royce’s dark tale of a totalitarian government, power is sourced from the dead.

Containment is full of rich complex characters you cannot help but want more from.”

Nina D’Arcangela is a quirky horror writer who likes to spin soul rending snippets of despair. She reads anything from splatter matter to dark matter. She's an UrbEx adventurer who suffers from unquenchable wanderlust. She loves to photograph abandoned places, bits of decay and old graveyards. Nina is co-owner of Sirens Call Publications, co-founder of the horror writer's group 'Pen of the Damned', and if that isn't enough, put a check mark in the box next to owner and resident nut-job of Dark Angel Photography.
View all posts by Nina D'Arcangela →
This entry was posted in Amazon, Authors, Blog Tour, Dark Fiction, Horror, Novella, Women in Horror Month and tagged Amazon, book, Contaminate, Eden Royce, Horror, WIHM 2014. Bookmark the permalink.