Celebrating Women in Horror Month – Vengeance Is Mine, by Kat Yares!

Vengeance Is Mine
Kat Yares 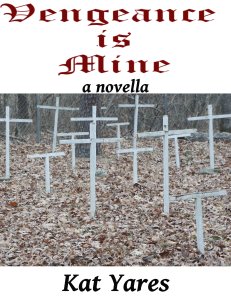 As the small, religious community ruled by the sadistic Brother Joseph Jones braces for a coming ice storm, a battered, beaten Macie Jones hovers between life and death. Cooter James, a former POW, discovers Macie’s freezing body and must make a decision: try to save the woman he has found or continue to ignore the happenings in the village below and maintain his hermit like existence. His decision made, Macie lies comatose in Cooter’s cabin and discovers that she has opened the veil between the living and dead of the brutal, patriarchal community. Through her, the women and children that suffered before her have found a way to repay their own brand of vengeance on the men who treated them so brutally in the name of God. In the dreamtime, Macie must make her own decision: help the women with their plans of revenge or try to prevent any further death and pain. This novella contains graphic violence and would be rated “R” if it were a motion picture.

Pick up a copy on Amazon.com!

Nina D’Arcangela is a quirky horror writer who likes to spin soul rending snippets of despair. She reads anything from splatter matter to dark matter. She's an UrbEx adventurer who suffers from unquenchable wanderlust. She loves to photograph abandoned places, bits of decay and old grave yards. Nina is a co-owner of Sirens Call Publications, a co-founder of the horror writer's group 'Pen of the Damned', and if that isn't enough, put a check mark in the box next to owner and resident nut-job of Dark Angel Photography.
View all posts by Nina D'Arcangela →
This entry was posted in Amazon, Authors, Dark Fiction, Horror, Novella, Women in Horror Month and tagged Amazon, book, Horror, Kat yares, Novella, Vengeance is Mine, Women in Horror Month. Bookmark the permalink.

1 Response to Celebrating Women in Horror Month – Vengeance Is Mine, by Kat Yares!