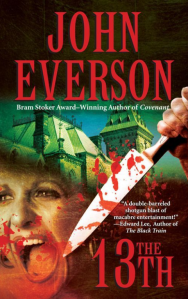 Castle House Lodge. A century ago it was an exclusive resort hotel. But for years it’s stood empty, a haunting shadow of its former glories. Now, after twenty-five years of rumors and ghost stories, the overgrown grounds are showing signs of being tended. The building itself has been repaired. Castle House has new occupants.

What was once a haven for the elite is now a madhouse, a private asylum for pregnant women. But are all the patients really insane? And is it just a coincidence that people have begun to disappear from the nearby town? David Shale’s girlfriend is one of the missing, and he’s determined to find the truth behind the mysterious Dr. Rockford and his house of secrets. He will learn the meaning of the red X painted on the basement door…and he will know the ultimate fear, the horror of…THE 13th.

Nina D’Arcangela is a quirky horror writer who likes to spin soul rending snippets of despair. She reads anything from splatter matter to dark matter. She's an UrbEx adventurer who suffers from unquenchable wanderlust. She loves to photograph abandoned places, bits of decay and old grave yards. Nina is a co-owner of Sirens Call Publications, a co-founder of the horror writer's group 'Pen of the Damned', and if that isn't enough, put a check mark in the box next to owner and resident nut-job of Dark Angel Photography.
View all posts by Nina D'Arcangela →
This entry was posted in Fear, Horror, Novels and tagged Castle House Lodge, ghosts, John Everson, madhouse, missing, The 13th. Bookmark the permalink.