Night of the Aurora
by Christina Sng

When the aurora appears
The dead return,
Surrounding the homes
Of those they once loved.

My neighbor’s young son
Rushed out to see his mom,
Was swooped up in her arms
And carried into the dark.

The postmaster’s wife stood
Outside his house where he
Now lived with his new love,
Calling softly for her children

While their father held them
Tightly around their necks
Till one broke loose and fled
To his mother. Then, the other.

Mrs Lee, who lost her husband
Just last summer, stood alone
In the garden, until his shadow
Loomed and enveloped her

As did Bob, the golden retriever,
Tentatively wagging his tail
Before running into the mist
Where his human awaited.

The sheriff raced outside
To shoot his dead brother but
Was snatched into the darkness,
Screaming about shapeshifters.

I sat and waited on the porch,
Carrying my stuffed ragdoll,
The one Mama made for me
When I was first born.

Kitty sat beside me,
Hissing when Papa appeared.
Startled, I backed away
From his outstretched arms.

“Are you Papa?” I asked.
“Of course,” he replied.
“Tell me something
Only Papa would know.”

He smiled, “Once,
You got lost in a mall,
But I found you
And took you home.”

It was a lie.
Papa never took me out.
He was always at work
Or with his other girls.

I backed away into the house
And slammed the door shut,
Deadbolting all the locks
As Mama ran down the stairs,

Almost tripping over Kitty
Who darted away in surprise.
Mama held me in her arms,
Never chastising me.

“You knew I had to try,” I cried.
She nodded, weeping with me.
We held each other until dawn,
Till the sun arrived

And the aurora was gone. 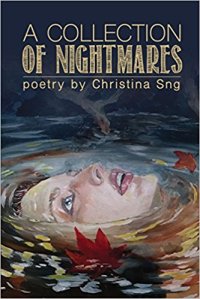 A Collection of Nightmares

Hold your screams and enter a world of seasonal creatures, dreams of bones, and confessions modeled from open eyes and endless insomnia. Christina Sng’s A Collection of Nightmares is a poetic feast of sleeplessness and shadows, an exquisite exhibition of fear and things better left unsaid. Here are ramblings at the end of the world and a path that leads to a thousand paper cuts at the hands of a skin carver. There are crawlspace whispers, and fresh sheets gently washed with sacrifice and poison, and if you’re careful in this ghost month, these poems will call upon the succubus to tend to your flesh wounds and scars.
These nightmares are sweeping fantasies that electrocute the senses as much as they dull the ache of loneliness by showing you what’s hiding under your bed, in the back of your closet, and inside your head. Sng’s poems dissect and flower, her autopsies are delicate blooms dressed with blood and syntax. Her words are charcoal and cotton, safe yet dressed in an executioner’s garb.
Dream carefully.
You’ve already made your bed.
The nightmares you have now will not be kind.
And you have no one to blame but yourself.

Nina D’Arcangela is a quirky horror writer who likes to spin soul rending snippets of despair. She reads anything from splatter matter to dark matter. She's an UrbEx adventurer who suffers from unquenchable wanderlust. She loves to photograph abandoned places, bits of decay and old grave yards. Nina is a co-owner of Sirens Call Publications, a co-founder of the horror writer's group 'Pen of the Damned', and if that isn't enough, put a check mark in the box next to owner and resident nut-job of Dark Angel Photography.
View all posts by Nina D'Arcangela →
This entry was posted in Authors, Dark Fiction, flash fiction, FREE, Horror, Ladies of Horror, Writing Project and tagged author, Christina Sng, fiction, flash fiction, Horror, Ladies of Horror, picture prompt, Writing Project. Bookmark the permalink.