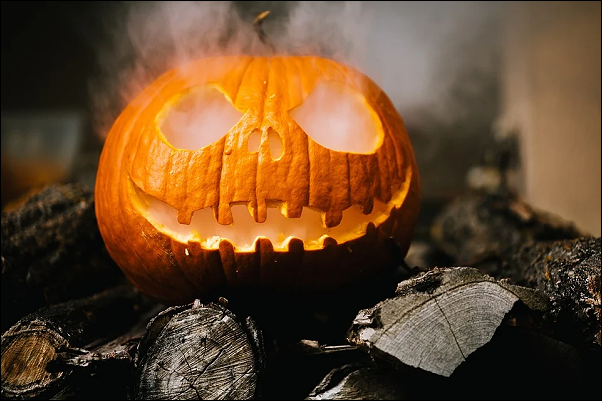 A Bad Patch
by R.A. Clarke

“We need to leave,” Gord whispered, pushing with every ounce of energy he possessed.

“It will not happen, Gord.” Jackie, exhausted, gave up, taking a deep breath. “These vines are too strong.”

“They can’t be. You’ve seen the way those farmers snap stalks—like its nothing. We can do it.” Gord refused to accept defeat. “This is life or death.”

Jackie didn’t move, a sombre shadow settling over her beautiful orange glow. “I know. But maybe this is just the way of things. Have you thought of that?”

“I don’t want to hear that kind of talk.” Gord’s gaze flicked to Shaker and Hubbard perched atop a hay bale at the edge of the patch. Their triangular eyes stared across the vine-covered field; gaping mouths carved into smiles. Both hollow, vacant—devoid of an essence that once existed there.

“We can’t end up like the others.” He reached out to her. Jackie’s bulbous shape still captivated him after all these months. “We’re in this together. Aren’t we?”

A warm fall sun blazed down upon their once cozy little patch. Jackie sat silent; her glow cast upon the hard-packed earth. Gord’s leaf rested on one of hers.

Slowly, Jackie met his gaze. “I don’t have your strength. You must go without me.”

“Don’t argue.” Rolling her base beneath the vine holding her captive, she collided with Gord.

“What are you doing?”

Voices signalled from beyond the patch. The farmers. The pumpkins glanced at each other, leaves quivering. Jackie rolled again, hitting harder.

A wet crack rang out.

“They’re coming. We have little time. I can’t break free, but with my help—you can. Now roll into me!”

Gord growled. “Fine, but once I’m free, I’ll get you loose.” The voices reached the patch. Maybe they won’t even take us. Other squash and gourds grew nearby.

The pumpkins collided with a force that reverberated through their skin. Gord’s stalk finally severed.

Footsteps approached. “He’s coming!” Gord slammed himself against Jackie, desperate to free her.

He tried again, to no avail.

“Go now!” Jackie screamed, jerking forward. Her body was more robust and Gord rebounded on impact, barrelling beneath the thick vines that provided shelter during the growing season.

“What the—?” the farmer muttered, noticing the leaves rustle. His hairy face peered down, scouring the greenery. “Hmm, must’ve been a rabbit.” He reached down to snap Jackie’s stalk.

“No, stop!” Jackie ordered, looking at him with solemn resignation. Two hands hoisted her into the air. “It was meant to be this way. Promise me you’ll get as far from here as you can. I love you.”

The farmer’s beady eyes swung across the field. “Toby! Go grab another one from the west patch, will ya? A big one. These people want two.”

Gord’s mind whirled. He glanced at his lifeless friends on the hay bale, then back to Jackie—his whole world. What good was surviving without her? Gathering his courage, Gord pushed out from his leafy shroud of protection. He wheeled forward with a roar, ramming into the farmer’s leather boot.

In shock, the human stumbled backward. His toe caught on a vine, body lurching to the side. Jackie slipped from his grasp. She cried out in terror as she plummeted to the earth, gravity pulling her down with dogged determination.

Jackie captured his gaze moments before she slammed into the ground, the farmer’s wretched body falling not far behind.

Gord rolled forward, pressing against her side. “Jackie?” Her base was cracked, several large fissures stretching up her sides—her seeds bleeding onto the dirt. “Oh, no. Jackie?”

She trembled, glow fading. “You should have left,” she whispered, voice weak.

“Never. I love you.” Her tangerine skin warmed against his one last time, then she faded away. Gord felt his insides turning to lead. It wasn’t supposed to be this way.

The farmer climbed to his feet, dusting grime from his pants. “Dammit!” He growled, inspecting Jackie’s broken form. “Ah shit.” He cast a scowl at Gord, reaching to grab him. “Where the hell did you come from?”

Gord met the man’s gaze, standing rounder than ever. Though humans were too simple to perceive their language, that didn’t stop him from screaming, “You killed her! You stupid, horrible creature.” With nothing left to lose, Gord jerked backward, wheeling beyond reach. The patch erupted, squash and pumpkins shouting their support.

Gord attacked, quaking with rage. The human scrambled, jumping from side to side.

“The damn thing’s possessed!” Tripping again, the farmer’s arm braced for the fall.

Gord advanced, grinding over the man’s hand with his stalk. “Leave and never come back!”

Finding his feet, the farmer’s eyes bulged. Rubbing his aching hand, his mouth twisted, hands flexing into knotted balls. Gord tried to escape, but those hands snaked out too fast, snatching him up. Shocked gasps sliced through the air.

“Join your friend,” the farmer hissed, lifting the pumpkin high in the air.

Then Gord was flying.

The sensation only lasted a moment before he crashed down beside Jackie, splitting at the seams. Trembling amidst the cries of nearby squash, Gord sagged, pain and exhaustion taking over. He looked at his love. “I told you I’d never leave you.” Then darkness fell.

The farmer cackled, spitting out the side of his mouth. He turned, thrusting a hand into the air. “Hey, Toby. Grab two!”

Stalks snapped on all sides. Battle cries rang out as patch inhabitants rallied to avenge the grievous injustice.

The farmer’s eyes widened, back-stepping as a horde of vegetables swarmed his way. “The whole damn patch is possessed!”

A terrified Toby ran by in a blur. “I’ll get the pitchforks!”

Frantically digging through his pockets, the farmer’s fingers tightened around a lighter. Unleashing a maniacal laugh, he shouted, “Forget the forks, son! Bring the gas cans.”

R.A. Clarke is a former police officer turned stay-at-home-mom living in Portage la Prairie, MB with her sport-aholic husband, two mischievous children, and a couple quirky dogs. She survives on sloppy toddler kisses, copious amounts of coffee, and immersing her mind in fantastical worlds of her own creation. R.A. keeps busy writing/illustrating children’s literature, and is currently working on a novel. Her short fiction has been published by Polar Borealis Magazine, Writers Weekly, The Writer’s Workout, and Sirens Call Publications. Her debut chapter book The Big Ol’ Bike will release in late 2020.

Nina D’Arcangela is a quirky horror writer who likes to spin soul rending snippets of despair. She reads anything from splatter matter to dark matter. She's an UrbEx adventurer who suffers from unquenchable wanderlust. She loves to photograph abandoned places, bits of decay and old grave yards. Nina is a co-owner of Sirens Call Publications, a co-founder of the horror writer's group 'Pen of the Damned', and if that isn't enough, put a check mark in the box next to owner and resident nut-job of Dark Angel Photography.
View all posts by Nina D'Arcangela →
This entry was posted in Authors, Dark Fiction, flash fiction, FREE, Horror, Ladies of Horror, Writing Project and tagged author, fiction, flash fiction, Horror, Ladies of Horror, picture prompt, R. A. Clarke, Writing Project. Bookmark the permalink.