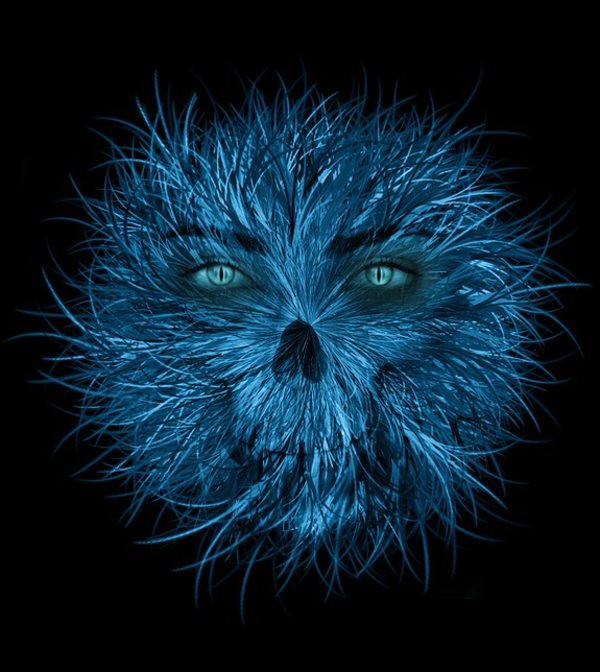 Alondra heard a discordant scream, dropped her book, and sprinted into the woods.  She was pounding down the path toward the sound before she realized what she was doing. Her feet tangled in a tree root and she landed full out in the dirt. The breath was pounded out of her.

The high-pitched voice pleaded now.  Alondra picked herself up and limped onward, cautious now.  It sounded like her brother had captured something and was tormenting it, but Alondra couldn’t decide what it must be.  The voice sounded almost as if it was speaking words.

She saw a flash of blue ahead, beyond the clearing beside the fairy oak.  Alondra slid into shadows outside the clearing, peering past branches to see what was happening.  If it was Alexander, she would have to run back for help.  She wished she’d thought ahead. She couldn’t let her brother know she was spying on him.

Instead of her brother, a creature made of moonlight and bone hunched in the crevice of the oak. Its paw clutched something the size of a bird.

The monster’s head raised, as if it snuffled up her scent.  When its face turned toward her, Alondra realized it had no nose.  Its skull was visible beneath its straggling fur.  Its icy blue eyes, when they focused on her, had pupils slitted like a cat’s.

“This is none of your concern,” it growled.  Its words were remarkably clear, considering it had no lips to shape the sounds.

“Let it go,” Alondra ordered. Her voice shivered and she swallowed.  “My mother has a treaty. You can’t harm them here, or you’ll be sorry.”

Whatever it had captured spat out a stream of invective.

The monster tilted its head, as if considering. Then it said, “You may buy its safety from me.”

“What do you want for it?” Alondra asked.

She patted through her pockets. Tucked in the back pocket of her jeans was the bookmark to her forgotten book.  She’d made the bookmark by pressing wild flowers between waxed paper and ironing it.  She held it out.

“Bring it closer,” the creature said.  “I can’t see it that far away.”

Alondra stepped out into the sunlight with the bookmark held at arm’s length.

“Yes, you do,” Alondra quavered.

“Yes, I do,” it agreed.  It shook the critter in its hand, which made a sound like broken mirror in a box.  “Come closer, child. The light is too bright for my eyes.”

Alondra walked to the middle of the clearing.  The bookmark shook in her out-stretched hand.  She swallowed hard.  “What’s your name?”

“What would you call me?”

Alondra halted and tucked the bookmark back into her pocket.  “Our bargain’s made,” she said, echoing her mother.  “I’ve given you a name.”

The monster bared its teeth and let the fairy go.

Young witch Alondra DeCourval meets a fox spirit in Tokyo, faces an ancient evil stalking through Venice, and exorcizes a possessed doll. These stories made the long list for the British Science Fiction Association Award and Ellen Datlow’s Honorable Mentions in Best Horror of the Year #9. One was published in Best New Horror #27, edited by Stephen Jones.

“Loren Rhoads is quite simply a marvelous writer. I’ve rarely encountered such beautiful writing. Her newest book weaves mysterious and magical tales that captivate and seduce readers into exotic, lush worlds. Rhoads is a highly-skilled wordsmith and this dark fantasy collection is a must-read.” — Nancy Kilpatrick, Author of the Thrones of Blood & Power of the Blood series

Nina D’Arcangela is a quirky horror writer who likes to spin soul rending snippets of despair. She reads anything from splatter matter to dark matter. She's an UrbEx adventurer who suffers from unquenchable wanderlust. She loves to photograph abandoned places, bits of decay and old graveyards. Nina is co-owner of Sirens Call Publications, co-founder of the horror writer's group 'Pen of the Damned', and if that isn't enough, put a check mark in the box next to owner and resident nut-job of Dark Angel Photography.
View all posts by Nina D'Arcangela →
This entry was posted in Authors, Dark Fiction, flash fiction, FREE, Horror, Ladies of Horror and tagged author, fiction, flash fiction, Horror, Ladies of Horror, Loren Rhoads, picture prompt, Writing Project. Bookmark the permalink.