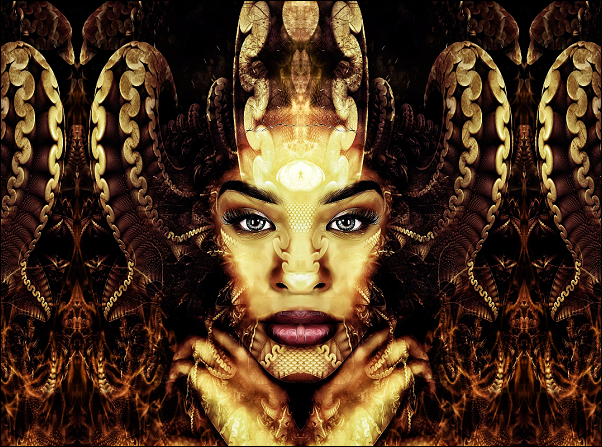 She was supposed to be a living goddess. That was what she’d been raised believing. She was beautiful, charming, chosen. She’d been drenched in silks and perfumes on her coming of age day, surrounded by gold as she danced toward the palace. Only a few could go there, after all. Only the special, the select, the chosen.

She looked behind her at the gathered villagers who were so quiet, so reverent, so hopeful. It had been so long since a girl from their parts had been born to the position. She did her best to fight the tears, promised she’d do well by them, then turned with her head high, back straight, gait proud as she strode into her new home.

She would rule kindly, she had already decided this. It was part of so many plans she’d spent years cultivating when she wasn’t bogged down with lessons on etiquette and conduct.

She was the best. The goddess. The chosen. Bedecked in gold. It wrapped her hair and entwined her head, draped her face, was part of her, marked her with her intended station.

She padded into the entrance hall of the castle she’d stared at with longing her whole life. She’d dreamt about what lay inside it, waiting for her, all her life.

There were no servants to greet her, no high priest, no advisor. No finery. Nothing of her daydreams, nothing of what her family, her village had told her with smiles and deep bows.

There was nothing but rotting wood, crumbling walls, darkness.

“What?” she whispered, and the whole place felt like it awakened to her voice. It was not a good feeling.

There were eyes. Eyes and pulsing things in the dark walls.

“Welcome, Goddess.” The words hissed straight into her mind but also pulsed along the walls. She turned, and every place she turned were eyes that stared right into her, echoing the greeting, sneering the term like it meant nothing.

Reality itself pulsed and pulled at her, until she was running. It didn’t matter where, she didn’t care that she was moving deeper, into a dark, dark room.

“What’s the meaning of this? How dare you?” She had wanted to sound haughty, but her voice crumbled when she tried to use it.

“Poor little one. You don’t understand, do you?” The voice was that of something that belonged in the shadows, in the deep forest. It hinted at things left in the remains of nightmares.

She trembled, but stood her ground. “I am here to fulfill my duty. This is my palace. I was chosen!” She managed to sound stern and was relieved because of it.

For a moment hundreds of eyes blinked around her and the air seemed to bend and sway. And then a terrible, dark chuckling filled her ears.

“Silly mortal. Of course you were chosen. Every village must choose the best and take their turn giving to me.”

“Is there a goddess without a god? A deity without a sacrifice? Silly girl, of course you were chosen. You just didn’t know for what.”

The creature in front of her considered her as she stood proud, silent, calm. Inside, she was petrified and her mind crumbled, but she would not scream, would not cry, would not let her village down, even if they had betrayed her, even as the flames spread over her, even as the thing that loomed over her opened its mouth to feast.

She may have been chosen, but she would act like nothing less than a goddess.

Nina D’Arcangela is a quirky horror writer who likes to spin soul rending snippets of despair. She reads anything from splatter matter to dark matter. She's an UrbEx adventurer who suffers from unquenchable wanderlust. She loves to photograph abandoned places, bits of decay and old grave yards. Nina is a co-owner of Sirens Call Publications, a co-founder of the horror writer's group 'Pen of the Damned', and if that isn't enough, put a check mark in the box next to owner and resident nut-job of Dark Angel Photography.
View all posts by Nina D'Arcangela →
This entry was posted in Authors, Dark Fiction, flash fiction, FREE, Horror, Ladies of Horror, Writing Project and tagged author, fiction, flash fiction, Horror, Ladies of Horror, picture prompt, Selah Janel, Writing Project. Bookmark the permalink.