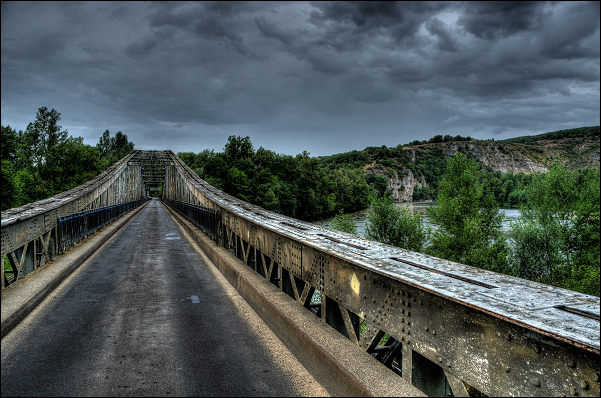 The Bridge
by Selah Janel

It was going to rain soon and the bridge kept going. Callie felt like she’d been driving forever, though surely it hadn’t been that long.

I’m just tired. I should’ve gotten more sleep last night. She cranked up the air and the radio, checked to each side of her for the hundredth time to make sure she wasn’t drifting. Bad enough that a while ago she’d nearly fallen asleep and a car horn had woken her up, made her yank herself back to her own lane.

At least there aren’t any other cars up here. The thought didn’t quite make her feel better, though. A glance out to the water proved that it was a long way down. Her stomach tightened. She quickly looked back to the road, and up to the sky. Please let the rain hold off. This is bad enough

She hated bridges. Always had. Her head did weird things, her chest tightened, her breathing sped up, her stomach rolled, and she always started to panic until suddenly she was back on the real road and safe at last and feeling stupid.

Any second now, and I’ll be safe, she told herself and tried not to look at how old the guard rails seemed to be, or that the road itself wasn’t in the greatest of shape. She cranked the radio again, her left hand clutching the wheel as if it was the only thing keeping her in the car. I can do this I can do this just sing along and–

Wait, has it always been static?

The radio popped and hissed a constant white noise.

She frowned and looked down to it—

She was plummeting. Callie screamed, flailed as her stomach dropped out from under her, beat on the window, braced for impact, was already sobbing-

She jerked awake, shaking. That was close. She took a shaky breath and slowed down just a hair, though she really wanted to just gun it the rest of the way across.  I’m just tired. I should’ve gotten more sleep last night.

It would be fine. It had to be fine. Even the longest bridges ended at some point, right? She tried not to look too closely at how old the thing was and hissed a breath out from between her teeth in an unrecognizable mantra. At least there aren’t any cars up here.

She frowned, a strange feeling of repetition drifting over her, but she shook it off. Bridges always did strange things to her, and it had to end soon. She clutched the wheel and turned up the radio again, frowning at the static.

It was going to rain and the bridge kept going. 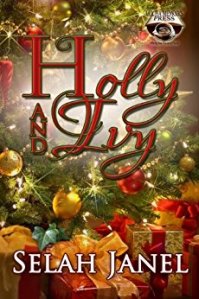 After losing her job and her boyfriend, Holly returns to her parents’ farm. Embarrassed and hopeless, she doesn’t expect to bump into a forgotten childhood friend that wasn’t supposed to exist. Ivy is not only a dryad, but she lives in the pine trees Holly’s family grows to sell at Christmas. As the old friends reconnect, Ivy not only shares her strong opinions, but gives Holly a charm that will change both their lives. As days melt into weeks and the seasons change, Holly’s life magically turns around. Christmas not only brings surprises, but a choice for the human woman. What’s more important: stability, success, and love, or keeping a promise to an old friend?

Nina D’Arcangela is a quirky horror writer who likes to spin soul rending snippets of despair. She reads anything from splatter matter to dark matter. She's an UrbEx adventurer who suffers from unquenchable wanderlust. She loves to photograph abandoned places, bits of decay and old grave yards. Nina is a co-owner of Sirens Call Publications, a co-founder of the horror writer's group 'Pen of the Damned', and if that isn't enough, put a check mark in the box next to owner and resident nut-job of Dark Angel Photography.
View all posts by Nina D'Arcangela →
This entry was posted in Authors, Dark Fiction, flash fiction, FREE, Horror, Ladies of Horror, Writing Project and tagged author, fiction, flash fiction, Horror, Ladies of Horror, picture prompt, Selah Janel, Writing Project. Bookmark the permalink.