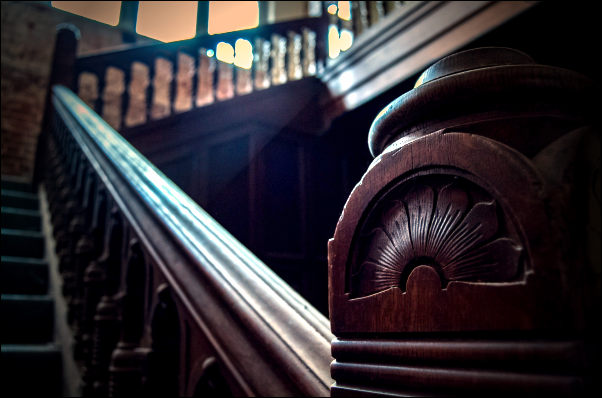 The stairway to the heavens…that’s what we used to call the main stairway at Maisey’s place. It was the place where we went when we needed to cry over boy trouble, or crow about a new conquest. Maisey would offer a shoulder to cry on or a glass of champagne (don’t tell the parents, she’d whisper with a wink.)

Maisey was a whore, some said. But to us, she was a queen. That stairway was the way to her throne. The last night I saw her, Maisey was up there, in her throne room. We were no longer the children bringing her our sorrows and our successes…we were young women with lives less tangled in the tresses of the aging madame down the road.

I went to tell her that I was leaving town—going to college in another state. I ran up those stairs as lightly as an angel…to find a secret I had never suspected.

Maisey lay in the center of the scarlet carpet—but she wasn’t alone. She was…feeding on a young boy. She didn’t see me, and I backed away with my hand over my mouth so she wouldn’t hear me either.

I crept down the stairs to the bottom. To a loose baluster that I had always liked to spin in my hand. I pried it out like a broken tooth, one end sharp from the method of construction.

My fingers traced one last time over the feathers carved into the head of the newel post. Those feathers had wafted me up those stairs so many times in my life…and now, they urged me on.

Baluster in hand, I went up the stairway to heaven one last time…and stabbed that vile vampiress in her black heart. Fleeing down the stairway on winged feet, I stopped only long enough to set a match to the well-worn carpet on the entryway floor.

I watched it catch, licking its way toward the stairway to heaven with the flames of hell. And the ashes fell around me like the feathers on the newel post.

Twenty-two short horror stories written by women are here on display for your enjoyment or your perverse fascination. Within these pages, beauty becomes deadly, innocence kills, and karma is a harsh mistress. The Grotesquerie is now open…