The Hoboken has awoken… 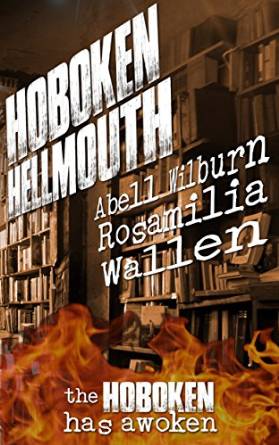 Solomon became the Hellmouth in his first adventure in Hollywood. As he reaches Hoboken, great power does not go smoothly for him. He will face the choices of his past and the consequences for the present as something dark and ancient awakens below the cursed land of New Jersey. This time, the Hellmouth will have boobs … big boobs, but will they be enough?

Once again authors Jack Wallen, Jay Wilburn, Brent Abell and Armand Rosamilia have gone where no four authors should ever go!

The authors behind Hollywood Hellmouth –

– have put together another insane ride for you to feast your mind on!

Nina D’Arcangela is a quirky horror writer who likes to spin soul rending snippets of despair. She reads anything from splatter matter to dark matter. She's an UrbEx adventurer who suffers from unquenchable wanderlust. She loves to photograph abandoned places, bits of decay and old grave yards. Nina is a co-owner of Sirens Call Publications, a co-founder of the horror writer's group 'Pen of the Damned', and if that isn't enough, put a check mark in the box next to owner and resident nut-job of Dark Angel Photography.
View all posts by Nina D'Arcangela →
This entry was posted in Action, adult, Dark Fiction, Horror, Novels and tagged Armand Rosamilia, Brent Abell, Hoboken Hellmouth, Horror, Jack Wallen, Jay Wilburn. Bookmark the permalink.