The fifth installment of the main Dying Days zombie series!

Darlene and John have been scattered… can they fight through miles of undead to find one another? Will The Lich Lord destroy what is left of this post apocalyptic world? Will the Main Street compound survive another day?

Thirteen tales of Darlene Bobich in one book!

The prequel to the successful “Dying Days” zombie novella series

Find out how Darlene Bobich got her start in this post apocalyptic world overrun with zombies… her fights and her fleeing from the devastation of her home in Maine down to Florida, and the adventures that follow even as the world around her devolves into extinction…

Sunny Florida, beautiful beaches, no traffic on A1A… Zombies roaming the dunes in search of the living… Darlene Bobich in a fight to survive, find food, safety and ammo for her Desert Eagle before its too late… the undead are coming to exterminate the human race…

St. Augustine, the oldest city in what used to be America… now an apocalyptic wasteland, where undead fight over the scraps…

For Darlene Bobich and the remaining survivors it will be the ultimate test… zombies surrounding them, zombies coming from the ocean, across the Bridge of Lions… undead searching in eternal hunger…

Flagler Beach Florida is a wasteland of ruin and gore, looted and picked clean of supplies… and now, Darlene Bobich and the other survivors have an even bigger problem…

What could be worse than a mindless zombie horde? They are about to find out. 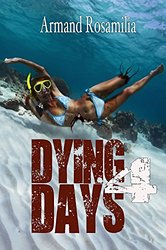 The fourth in the “Dying Days” series…

“Level up with Rosamilia’s take on smarter, scarier zombies! They don’t sleep and neither will you. Read this now!” ~ Robert Chazz Chute, author of This Plague of Days

“Armand Rosamilia has masterly crafted a unique zombie book with many moving parts. Dying Days 4 should be on every zombie fanatics TBR list” ~ Mark Tufo, author of the Zombie Fallout series

“With Dying Days 4, Armand Rosamilia continues to carve his own glorious path through the zombie apocalypse. His unique blend of sex and violence, well-rendered melancholy and tough as nails, pedal to the metal can do attitude makes for a story that gets it all just right. Rosamilia is a bright light for a dark country, and one of a handful of writers I know I can turn to when I want to have the crap scared out of me. He’s that good” ~ Joe McKinney, Bram Stoker Award-winning author of Dead City and Plague of the Undead

Armand Rosamilia is a New Jersey boy currently living in sunny Florida, where he writes when he’s not sleeping.

He’s written over 100 stories that are currently available, including a few different series:

He also loves to talk in third person… because he’s really that cool. He’s a proud Active member of HWA as well.

You can find him at http://armandrosamilia.com for not only his latest releases but interviews and guest posts with other authors he likes!

and e-mail him to talk about zombies, baseball and Metal: armandrosamilia@gmail.com

Nina D’Arcangela is a quirky horror writer who likes to spin soul rending snippets of despair. She reads anything from splatter matter to dark matter. She's an UrbEx adventurer who suffers from unquenchable wanderlust. She loves to photograph abandoned places, bits of decay and old grave yards. Nina is a co-owner of Sirens Call Publications, a co-founder of the horror writer's group 'Pen of the Damned', and if that isn't enough, put a check mark in the box next to owner and resident nut-job of Dark Angel Photography.
View all posts by Nina D'Arcangela →
This entry was posted in Action, Dark Fiction, Horror, Novella, Zombies and tagged Armand Rosamilia, Darlene Bobich, Dying Days 5, Horror, Novella, series, zombie. Bookmark the permalink.

1 Response to Dying Days 5, by Armand Rosamilia – The Fifth Novella in his Dying Days #Zombie Series.